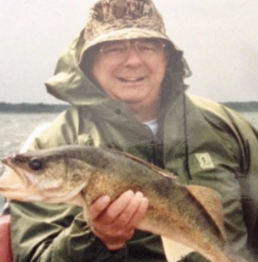 A story teller, a lover of life… Dick Roberts, our Dad, was born April 14th, 1932, and raised in Wadena where he helped out with the family café. They moved to Staples when he was in high school. Dick married Lorraine Schenkel and had one son, Michael Roberts. Lorraine passed away, and so Dad dated Gladys Roberts (Melsness). Mom already had 4 boys from her first marriage, Lindy, Steve, Russ, and Scott. Together they had 4 more children, Doug, David, Jim, and Susan, and made a life of long lasting memories. Dad hunted moose, elk, and deer. He fished a lot at Gull Lake, and frequently in Canada too, where we would go for a week each summer. He played poker (he used to say he was ‘going to the office’ when he went to play poker at Lefty’s… He was an airplane pilot, and president of the pilot’s club in Staples. He served in the military. He raised nine children. Oh and did I say he told jokes and stories?.. Dick Roberts was preceded in death by his wife Gladys Roberts, son’s Mike Roberts and David Roberts and Grandson, Joel Roberts. . He is survived by his sister, Pat (Roberts) Knapp, brother, John Roberts, sons Lindy Ellenbaum, Steve Ellenbaum, Russ (Linda) Ellenbaum, Scott Ellenbaum, Doug (Dianne) Roberts, Jim (MaryEllen) Roberts, and Susan Roberts, and many nieces, nephews, grandchildren, and great grandchildren.
Memorial service for Dick will be held on Friday, July 17, 2020 at 5:00pm at Taylor Funeral Home in Staples, MN, with visitation/family at 4:00pm, with Celebration of Life from 6-8pm at Lefty’s in Staples..