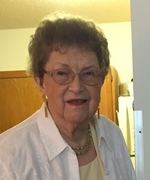 Margaret Ann Dyer of Staples, age, 100 years, 10 months, and 22 days, passed away surrounded by her loving family on March 22, 2017, at North Memorial Hospital in Robbinsdale, MN.

Margaret Ann Dyer was born on May 10, 1916 to Fred and Julia Hoemberg in Staples MN. Margaret was in the first graduating class of 8th graders from Sacred Heart Catholic School in 1930. After graduating from Staples High School, she worked for several years in her parents’ confectionary store where she met her husband Larry Dyer. They were united in marriage on May 17, 1940.

She was a devout Catholic with a great deal of faith and love for her family. She was an inspiration to everyone who knew her, and someone who had an unselfish devotion to others. She was a caregiver for her father after her mother died, and for her mother-in-law after her husband passed away. It was her mission to help family when needed.

Margaret was a strong and independent woman. Her grandchildren have described her as “the matriarch and prayer warrior of her family”. Her daily routine began and ended with prayer for family and friends. She had a great devotion to the blessed mother and praying the rosary. In fact, for the past 7 years while living at the Earle Brown Assisted Living Center, she led the rosary daily for the Catholic residents.

For many years Margaret was active in the Sacred Heart Church Circle, Mission Group, and was a member of the Staples Historical Society. Margaret’s memory was sharp as a tack. Many times, people from the community would contact her for information regarding historical events from days past in Staples.

She loved sewing quilts, dolls and stuffed animals, making tree skirts, and holiday ornaments for others. She was known for her homemade donuts, pies, banana breads and ham salad sandwiches. Margaret loved writing poems. This was one of her ways of sharing her thoughts and feelings on holidays and special occasions.

There are no words to describe the love were have for our mother, grandmother, and great grandmother. She will be deeply missed by everyone, but the memories we hold will carry us through. God has gained the most beautiful and loving angel.

Mass of Christian Burial 11:00am on Saturday, March 25, 2017, at Sacred Heart Catholic Church in Staples with visitation from 9:00-11:00 am also at the church. Father Joe Korf will be presiding. Interment will be at Evergreen Hill Cemetery in Staples. In lieu of flowers, memorials preferred to Sacred Heart Church or Sacred Heart School.

Provide comfort for the family by planting a tree in memory of Margaret Dyer, please visit our Heartfelt Sympathies Store.