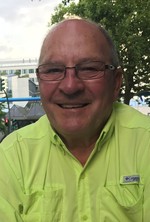 Larry Godejohn, 74, of Cushing Minnesota, went to be with the Lord on Friday April 24 2020. Born on November 10, 1945, he grew up outside of Erie, North Dakota, learning to love all things outdoors and playing sports. He graduated from University of North Dakota, where he studied accounting and where he met his wife Shirley. He and Shirley married in 1967. He served in the US Army and was a successful entrepreneur, having owned and operated Staples Sports, with Shirley, from 1983 to 2019. He loved fishing, hunting and traveling the world; including the completion of the “Great Loop” - circumnavigating the USA by water. He was a member of a New Orleans Mardi Gras organization and enjoyed riding in the parades. He is preceded in death by his mother and father, Eulalia and Theodore Godejohn, and sister Carol Godejohn. He is survived by his wife, Shirley; a daughter and grandson, Angie and Alex Godejohn; a daughter and son-in-law, Nicole and Eric Baird; a daughter and son-in-law, Tani and Tyler Johnson; two grandsons, Camden and Crosby Johnson; a brother and sister-in-law, Orvin and Janet Godejohn; and a sister, Donna Godejohn.
In lieu of flowers, donations may be made in Larry’s honor directly to Motley United Methodist Church Memorial Fund or to Scandia Valley First Response.
A celebration of Larry's life will be held on Saturday, August 29, 2020, at 11AM at Halvorson Taylor Life Events Center (512 S 8th St, Brainerd). Visitation will be one hour prior to the service