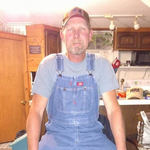 Jerry M. Jenkins 61-year-old resident of Backus, MN passed away Wednesday, February 27, 2019 at Essentia St. Joseph’s Hospital in Brainerd, MN. A memorial service will be held at 11 AM on Monday, March 4 at Halvorson Taylor Funeral Home and Crematory in Brainerd. Visitation will be one hour prior to the service also at the funeral home. A service in Warrensburg, MO will be held at a later date.

Jerry was born on October 18, 1957 in Warrensburg, MO to Albert and Evelyn Jenkins. He graduated from Warrensburg High School with the class of 1976, and then joined the National Guard. He moved to Minnesota in 1977 and worked at the flour mill in Hastings. In 1982 he went to work for the State of Minnesota doing maintenance for the Department of National Resources. He then moved to Little Falls in 2010 until relocating to Backus where he later retired. Jerry loved to ice fish, hunt, and most of all spend time with his granddaughter, Rose.

He is preceded in death by his parent; and brother, John.

Arrangements are with the Halvorson Taylor Funeral Home & Crematory in Brainerd.