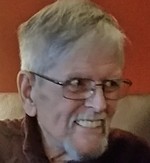 James (Jim) Richard Taylor of Brooklyn Park, Minnesota, passed away on May 27th, 2017, at the age of 71.
Jim was born on May 1st 1946 in Little Fork Village, Minnesota. He grew up in Champlin, Minnesota, graduating from Anoka Senior High School in 1965, and later attended North Hennepin Community College.
In 1966 he joined the Navy, serving at Guantanamo Bay, Cuba, and later aboard the U.S.S. Sierra. He received the National Defense Service Medal.

During his time in the service he met the love of his life, Janell Childers in Norfolk, Virginia. They married on July 13th, 1968.

After his time in the service he returned to Minnesota, eventually settling in Brooklyn Park. He worked in various positions, before becoming a punch press operator. He retired from Super Radiator Coil in Chaska, Minnesota, after 17 years of service, truly loving his work.

Jim had many interests, including model trains, woodworking, and sci-fi movies. He lit up the neighborhood with his holiday decorating, and impressed everyone with his many creative “fixes.” He loved all his children and especially planning “Camp Grandma and Grandpa” in the summer.

The family wishes to extend sincerest thanks to Fresenius Medical Care in Maple Grove, Minnesota, for their training and care; and to the VA Medical Center in Minneapolis, Minnesota for their excellent and compassionate care especially in these past weeks.

Provide comfort for the family by planting a tree in memory of James (Jim) R Taylor, please visit our Heartfelt Sympathies Store.