To share your memory on the wall of Harold (Hap) Corbett, sign in using one of the following options:

He is survived by his wife, Doris; his children, Kevin (Sally) of Detroit Lakes, Ken of Woodbury, Fran (Terry) of Medfield (MA), Colleen (John) Lawson of Lott (TX), Phil (Kelly) of Sartell, Tim (Bridget) of Pierz, Cella (Bob) Johnson of Sacred Heart, and Charlie (Jen) Corbett of Brooklyn Park; his sister, Juanita (Corky) Swartout of Minneapolis; and his brother, Jim Manthis of New Brighton; and many grandchildren; and great grandchildren.


Mass of Christian Burial for Hap will be held at noon on Monday, February 3, 2020 at the St. Francis Xavier Catholic Church in Sartell, MN. Visitation will be on Sunday, February 2, from 2:00 -5:00 pm in the Gathering Space at St. Francis Xavier, beginning with parish prayers. Visitation will also be held one hour prior to the funeral service on Monday. In lieu of flowers, the family prefers memorials to Good Shepherd Community, 1115 4th Ave N, Sauk Rapids, MN 56379, or Moments Hospice, 820 Lilac Dr N suite 210, Golden Valley, Minnesota 55422.

Receive notifications about information and event scheduling for Harold (Hap)

You will receive any future notification messages.
No funeral details available.

We encourage you to share your most beloved memories of Harold (Hap) here, so that the family and other loved ones can always see it. You can upload cherished photographs, or share your favorite stories, and can even comment on those shared by others.

Posted Feb 03, 2020 at 12:13pm
Dear Doris and family:
We are so sorry that we can not attend the funeral of your Dad today. The Corbett boys were always a pleasure to coach. The sign of a wonderful upbringing. I enjoyed all the children in school. Just a wonderful family.
A Grateful Teacher and Coach, Jerry Riewer

P.S. I enjoyed "Haps" chatter at all the baseball games.

Now, I just want to add that they were all wonderful people. Happys articles in the Catholic Visitor, and all the picnics after the games where Doris would make her Taco salad.Our kids and all in the neighborhood would play in their back yard. God Bless Doris and her family.

Posted Feb 03, 2020 at 11:33am
Dear Doris and family, I am so sorry for your loss of Hap, miss you at Staples. Remember when he did our readings at Pete's and my wedding on that hot Friday evening on Sept 3 of 1971. May God comfort all of you as this is a very hard time. Love and prayers, Barb Peterson
Comment Share
Share via: 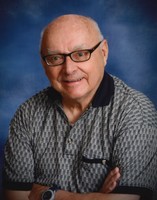