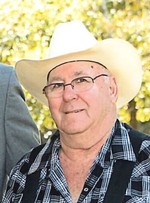 Eugene H. Altenbrun, passed away on November 21, 2020 at the Wadena Tri-County Hospital. Gene was born on April 15, 1941 to the late Rex & Sarah (Cain) Altenbrun in Rock Lake, North Dakota. He attended school through the 8th grade, then began working at various gas stations. Gene farmed in Clarissa, where he raised his three sons. He was united in marriage to Charlene Fredrick on April 8, 1995 and became a stepfather to her son, Richard. They made their home in Staples, where he owned Staples Sanitation for years. Gene enjoyed saddle clubs, horses, farming and going out to eat.
His greatest joy was spending time with his wife, Charlene and their family, Larry (Rose) Altenbrun, Rick (Deb) Altenbrun, Terry (Lorraine) Altenbrun, Richard (Tanya) Schmitz; 10 grandchildren; 10 great grandchildren. He will be greatly missed by all his family and friends.
A memorial service for Gene will be held on Sunday, December 6, 2020at 11AM at the United Methodist Church in Verndale.