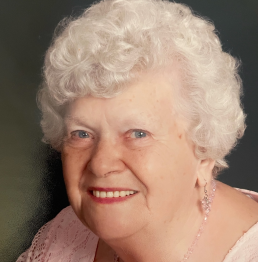 Eleanor Ruth (Ziehl) Welling, 89, passed away peacefully May 17, 2021, at Lakewood Health Care Center in Staples.
Eleanor (Ellie) was born February 24, 1932 in St. Paul, Minnesota to Frederick and Lavern (Schmidt) Ziehl. Ellie attended Evangelical Lutheran School through the 8th grade and graduated from Woodrow Wilson High School in 1949. Some of her fondest memories were of being a majorette in high school and marching and twirling in the St. Paul Winter Carnival parade.
Her love of sports started at a young age, attending the St. Paul Saints baseball games with her Father. Growing up in St. Paul also afforded her the luxury of attending the Minnesota State Fair every year where her Mother worked in the Lutheran Church kitchen booth. Ellie liked watching all sports, but especially, the MN Twins and MN Vikings. She never forgave the “Lakers” for moving to LA and refused to watch the “traitors” play!
Ellie married Elroy Jasmer on September 23, 1950, while he was in the Air Force. They moved to the Jasmer family farm, north of Clarissa, in 1955 where they raised their family and dairy farmed for many years. Elroy passed away in March 1989. Over the years, Ellie worked at Fingerhut in Sauk Centre, Carter-Wringer in Staples and Homecrest Industries in Wadena where she retired in 1994.
Ellie enjoyed traveling to Las Vegas every year to visit family (and ‘win’ a little) and attending area concerts, especially the military or patriotic-themed concerts. She was an active member of the First Integrity Bank Senior’s Group. While on excursions with them, she met her second husband, Arlyn Welling. They married on April 25, 1998, residing in rural Motley until they moved to the Pine Apartments; eventually moving to the Care Center in 2014. They continued to travel during their time together and one of their most memorable trips was to Hawaii for a Pearl Harbor Survivor’s Reunion.
She was a member of the Women’s Auxiliary in Wadena, the Ladies Aide group at church, and the Aldrich Lions Club. She frequently appeared as Mrs. Claus at Christmas. She enjoyed playing cards, reading, crocheting, and embroidery. She was famous for the many doilies she crocheted and the pillowcases she embroidered which she then donated for their fund raisers.
Ellie is survived by seven (7) children, Linda (Lee) McDonald of Boulder City, NV; Gail Jasmer of New Prague, MN; Susan (Victor) Soule of Browerville, MN; Rita (Steve) Gaugert of Bertha, MN; Jerry (Gail) Jasmer of Grand Rapids; Joel (Donna) Jasmer of Brainerd, MN; and Richard Jasmer of Brainerd, MN. Ellie has 13 grandchildren and 14 great-grandchildren.
Ellie was preceded in death by her parents, her sister, Virginia, her brother, Richard, her husbands, Elroy Jasmer and Arlyn Welling, and her son, Eugene Jasmer.
Ellie was extremely grateful for the time and care that was given to her over the last 7+ years while living at Lakewood Care Center. She was fun-loving and made many new friends. She enjoyed visiting and playing bingo with all of them! She loved to dance and sharing silly jokes with anyone that would listen; especially her grandchildren.
As a family, we would like to thank everyone at the Care Center for their wonderful care and service, ensuring Mom was comfortable to the very end.
A memorial service will be held on Thursday, May 27, 2021. Visitation with lunch will be from 12:00-2:00pm. Church service at Faith Lutheran Church, Staples, will be at 2:00pm followed by burial at the Balsumland Lutheran Cemetery rural Aldrich. Funeral arrangements by Taylor Funeral Home, Staples.