To share your memory on the wall of Doris Corbett, sign in using one of the following options:

Provide comfort for the family by sending flowers or planting a tree in memory of Doris Corbett.

Provide comfort for the family of Doris Corbett with a meaningful gesture of sympathy.

She subsequently joined Capital Airlines as a flight attendant, a calling she dearly loved and reminisced about often. While working as a flight attendant, she met Harold Corbett at a gathering of young adult Catholics. She and “Hap“ got married on December 27, 1958. They moved to Staples after their first baby was born and Doris stayed home to raise their children. In 1973, when her youngest of eight children started kindergarten, she began working half days at Staples High School, which became full days when he started first grade. She worked in many different areas of the school, including a teacher’s aide, a lunchroom supervisor, and an assistant in the counseling office, and enjoyed every minute of every day. She was honored in 1987 with the Outstanding Layperson in Education Award. In later years, one of her favorite places to work was the Freshwater Area Learning Center and in 2004 was asked by staff and students to give the commencement address at their graduation ceremony. In 2006, at the young age of 77, she studied for and passed the paraprofessional certification exam, getting one of the highest scores in the area.

Doris was very adept at managing her household, which was especially challenging when Hap would be on the road for work. A typical winter school morning started with Doris waking at 5:00 am to put wood in the furnace, making breakfast and packing cold lunches tailored to each one of her kids’ liking, going to work, then preparing dinner when the school day was done. Somehow, she fit getting a load or two of laundry in, too. In addition, she seldom missed any of her children’s sporting events or concerts because she so thoroughly enjoyed them. On weekends and in the summer, it was not unheard of for people who lived south of town to drop a kid or two off with Doris as they went into town to shop. Doris was able to manage eight kids, what could it hurt to add a few more for an hour or two! Doris preferred working outside, doing most any farm-like work possible, including gardening, roofing, various construction or carpentry projects, and cutting/hauling/splitting/stacking firewood, to name a few.

She was an incredible grandmother (and great-grandmother), always making time to engage with her grandchildren. Whether playing games, camping, watching their activities, or even having a sleep-over in the camper, she showed her grandchildren how much she loved them by her actions. A special treat her grandchildren, and her children, loved were her pancakes, made from scratch with no written recipe.

Doris was a very faith-filled, patient, loving, and caring person who put others before herself and always tried to see the best in people. She was dearly loved and will be missed.

She is survived by her children, Kevin (Sally) of Detroit Lakes, Ken of Woodbury, Fran (Terry) of Medfield, MA, Colleen (John) Lawson of Lott, TX, Phil (Kelly) of Sartell, Tim (Bridget) of Pierz, Cella (Bob) Johnson of Sacred Heart, and Charlie (Jen) Corbett of Brooklyn Park; her sister Phyllis Miller of Fitchburg, WI; and many grandchildren and great-grandchildren.

Funeral services for Doris will be held at a later date. The family prefers memorials to the Good Shepherd Community, 1115 4th Avenue North, Sauk Rapids, MN, 56739.

Arrangements are with the Taylor Funeral Home in Brainerd.

Receive notifications about information and event scheduling for Doris 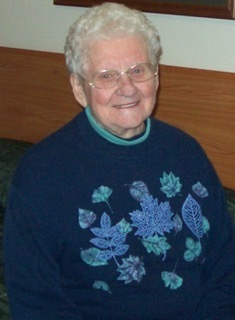 We encourage you to share any memorable photos or stories about Doris. All tributes placed on and purchased through this memorial website will remain on in perpetuity for generations.

Very sorry to hear about Aunt Doris, she was a wonderful lady. To the Hap & Doris family, thinking of all of you.
Tom Corbett
Comment | Share Posted Apr 04, 2020 at 08:25pm via Condolence
R

RIP Doris. You were always 100% in your love of your family and the students at SHS, later known as SMHS. In retirement you were my "go to"! Always willing to sub at a moments notice. Praying your family and friends are flooded with wonderful Memories of you and Hap.
Comment | Share Posted Mar 25, 2020 at 10:47am via Condolence