Memorial Candle Tribute From
Halvorson-Taylor Funeral Home
"We are honored to provide this Book of Memories to the family."
View full message >>>
In Memory of
Donald E
Vagle
1936 - 2019
Menu
Plant a Tree In Memory of Your Loved One
Click Here 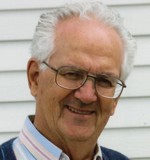 Donald "Don" E. Vagle, 82, passed into the arms of Jesus on February 2, 2019. A memorial service will be held February 16, 2019 1:00 pm at Christian Missionary Alliance Church, 1421 Jefferson Ave, Wadena, MN. Visitation will be held one hour before the service. Cremation has taken place.
Don was born in Kittson County, MN on August 31, 1936 to John and Elda (Keeler) Vagle. He spent his early years on his parents farm near Strandquist, MN. After graduating high school in Strandquist in 1956 he attended Evangel College, Springfield, MO. It is there that he met his wife, Marie Johnson. They married December 31, 1957. Their honeymoon was a move to Los Angeles, CA where Don attended college. It was there that they had their children, Stephen and Karen (Fitzlaff). When employed with McKesson and Robbins Don was transferred to Reno, Nevada. While in Reno the couple decided Minnesota was the best place to raise their family and they moved to Detroit Lakes, MN. Don became the accountant for the Wilcox Lumber Co. and then the Detroit Lakes Tribune. Don had been raised in a turkey farming family and in 1974 he ended his "desk job" and bought a turkey farm near Verndale, MN. In 1989, at age 52 they sold the farm and retired. From then on he had his dream job of studing and investing in the stock market. In 1989 it began the 26th year of living on Ottertail Lake in the summer and Whitney, Texas in the winter. In 2015 Don and Marie moved to Wadena due to his failing health.

Just some of the loved ones he is enjoying in heaven are his parents, an older sister he was never able to know here on earth, his infant daughter, Deane Michelle, and a host of friends.

In lieu of flowers, memorials are preferred to Gideons International or the Salvation Army.

For to me, to live is Christ and to die is gain. Philippians 1:21

Provide comfort for the family by planting a tree in memory of Donald E Vagle, please visit our Heartfelt Sympathies Store.