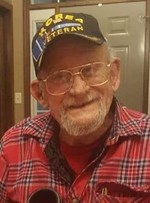 Donald served his country from 1949-1953 in the Marines, and from 1956-1960 in the Air Force. Don worked for Honeywell for ten years, then with the USPO for ten years, and finally twenty years with Niemann’s Sewing Company.

Donald is preceded in death by his parents; brother, Dennis; and sisters, Dianna Olson, and Delores Beeson; son-in-law, Robert Lidtke.

Services for Don will be announced at a later date.