In Memory of
Donald (Buck) T
Hansen
1935 - 2018
Click above to light a memorial candle.
Memorial Candle Tribute From
Halvorson-Taylor Funeral Home
"We are honored to provide this Book of Memories to the family."
View full message >>>
Memorial Candle Tribute From
Nancy (Keeling) Shinabarger
"I light a candle for you in remembrance of Donald T. Hansen. May the light of h"
View full message >>>
Plant a Tree In Memory of Your Loved One
Click Here
Menu 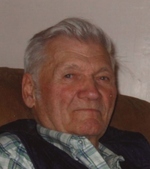 Donald T. “Buck” Hansen, age 83, of Motley, passed away March 21, 2018 at Essentia Health Hospital in Fargo, ND with family by his side. A funeral service for Buck will be held 1:00pm on Saturday, March 24, 2018 at the United Methodist Church of Motley, with Pastor Greg Leslie officiating. Visitation will be held Friday, March 23, 2018 from 4:00-7:00pm at the Taylor Funeral Home in Staples, and one hour prior to the service at the church on Saturday. Interment will be at the Motley Cemetery.

Donald was born to Martha (Stowe) and Theodore Hansen in Staples Township on January 21, 1935. He completed the ninth grade. For years he was a dairy farmer and also raised beef and hogs. Donald drove school bus full time for Staples-Motley School district for eighteen years and was a substitute driver for several years. He enjoyed horseback riding in the Pillager hills on his horse Shorty and made many friends on the trails. In his spare time he also liked to do construction projects. He was united in marriage to Beverly Ricketts on June 5, 1955. Together they had four children, Wayne, Rick, Nancy and Daniel. In 1998 Donald married Cathy Sadlo of Philbrook where they resided until the time of his death.

Provide comfort for the family by planting a tree in memory of Donald (Buck) T Hansen, please visit our Heartfelt Sympathies Store.