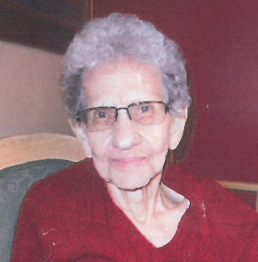 Dolores Ann Johnson was born April 18, 1930 in Aldrich Township on a farm to Milton and Josephine (Winter) Chapin. She grew up on the farm, went to District 6 School then went to high school in Staples but that didn’t work, so she quit school and stayed home and helped her Dad on the farm shuck grain and ride the binder. She also helped her mother detassel corn and catch frogs for bait for a friend in Aldrich to make some money. They lived by the river. She baby sat for the neighbor and helped her in the garden. They later made chili and canned it at the canning factory in Staples. Her family then moved to Staples where she met George Johnson at a dance. She later went with George out on his milk route to pick up milk cans from the area farms. She also helped a lady on the South side of Staples and took care of her and helped her husband in his store. She married George on April 17, 1947 in Sisseton, South Dakota. Our friends were our witnesses. Dolores and George made their home 4 blocks south of the Heier Store in Staples. She went to work at St. Charles Hotel, Wimpey’s Café, and Skelly’s Cafe. Then she got a job at Carter Ringer Sewing Company in Staples where she made girl scout shorts by the railroad tracks and later to the ringer plant to make jackets and coats for about 21 years. In later years she worked at the Benson Eye Plant as a janitor, then on the line until she got laid off and then retired.

George passed away March 23, 1993. She went to a dance with some lady friends and met a friend on September 25, 1996. They wintered for 8 years in Texas. Her friend then passed away. In April 2009 she volunteered to work at Hearth and Hands Thrift Store in Motley working there until 2015.The store changed its name to Joyful Hearts and she continued there sewing buttons (est. 4,609.91 buttons) on cards to sell. Dolores loved to dance, do crafts and play cards. She also enjoyed family reunions and spending time with her lady friends, her children, her grandchildren and great grandchildren.

Funeral services for Dolores will be held at 1:00pm on Monday, March 29, 2021 at Trinity Lutheran Church in Staples with visitation one hour prior to the service. Rev. Robin Collins will be officiating. Interment Evergreen Hill Cemetery in Staples.

In lieu of flowers family has requested donations be made to the Harmony House in Motley, MN.

Caring for Dolores and her family
Taylor Funeral Home of Staples