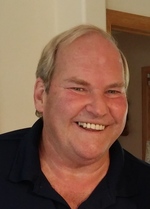 Bruce Alan Dibb passed away on Thursday May 14, 2020 at his lake home in Browerville MN at age 66

Bruce was born April 2, 1954 in Beloit WI to Earl H. Dibb Jr. and Mildred (Lampher) Olson. He was baptized on May 30, 1954 at St. John’s Lutheran church in Beloit and later confirmed in his faith as a youth at Immanuel Lutheran Church in Litchfield MN. He grew up in Litchfield with four brothers, where he earned Eagle Scout ranking in Boy Scouts of America, attended high school and was on the football and diving teams. Bruce was a talented engine and diesel mechanic, welder and fabricator. He took great pride in his abilities and enjoyed rebuilding engines of all kinds as well as many other hobbies including car racing, flying radio control airplanes, drones, fishing and photography.

On September 20, 1980, Bruce married Ann Marie Holle of Grove City. They resided in Blaine MN, until recently enjoying the peace and beauty of their lake home near Staples MN.

Bruce is survived by his wife Ann; Mother Mildred; Brothers: Russ (Lori) of Denver, CO, Steve (Sharon) of Stillwater, Bill (Linda) of Rice, Jon of Minneapolis; loved brother and sister-in laws, nieces, nephews; special uncle, aunt, step-parent; and many cherished friends. He was preceded in death by his father.

Bruce is remembered by his loving-caring heart, witty humor and humorous stories of his many adventures- he will be forever loved and missed.

Private memorial service will be held at a later time. Burial to be at the First Baptist Church in Grove City, MN. Condolences can be sent to P.O. Box 333, Staples MN 56479.