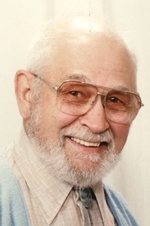 Armand Albert Faber of Motley, MN passed peacefully from this world after a courageous 21/2 year battle with cancer on April 9th at 6:54 pm, nine days before his 90th birthday. He died as he lived, with dignity and grace while holding his daughters hands.

Armand was born in Nashua N.H. April 18th, 1928 to Georgianna (Hudon) and Lucien Faber. It is here he met the love of his life Kristina (Tina) Makris and started a family of their own. In 1971 the family moved to Motley, MN where they farmed and raised hogs and later found their true passion- greyhound racing dogs.
After retiring from Benson Optical in Staples where he worked for 17 years as a QC inspector Armand immersed himself in his passion for the greyhounds. For 25 years Armand and his family bred, raised, trained and raced many very good greyhounds. Armand took great pride in this greyhound racing accomplishments and great pleasure in placing retired dogs in loving homes as beloved pets.

A self taught man of many talents Armand believed if you read you can teach yourself anything. Proof was his mastery of organic gardening, beekeeping, carpentry, wine making, genealogy, digital photography and computer fluency at age 70. Yet of all his interests Armand’s family was his greatest joy and number one priority. He leaves behind his legacy of integrity, optimism, compassion, driving principals that he lived his life by and instilled in his family. His determination to overcome obstacles, polio as a young child, several strokes in later years and cancer as of late earned him the title of Superman. Armand was loved and admired by all that knew him. His kind and accepting personality made him a true treasure on this earth. His caring ways and sweet sense of humor will always remain in the hearts of those who love him. Family member Sheri Faber says it all “ I loved Dad immensely. I don’t think I have ever known another soul with so much integrity and dignity. He was always welcoming, always kind and always had his arms open. He never judged others and would always listen. We have lost a great great man he will be missed.” “There are no goodbyes for us. Wherever you are you will always be in my heart”-Ghandi. Later……..Superman! There will be no services, family will have a private memorial.
Caring for Armand and his family
Taylor Funeral Home
Staples 218-895-9009
www.taylorfunerals.com